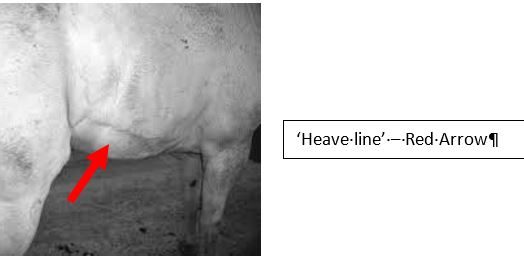 The classic ‘coughing horse’ is a common sight and sound at this time of year, and often transient viral respiratory disease is to blame. But as much as we love to blame a virus, they are not always the cause!

This year has seen an influx of allergy associated disease in all classes of stock and pets alike, and the coughing horse is no different.

‘Recurrent airway obstruction’ (RAO) is an allergy/hypersensitivity-based disease of the lower respiratory tract. Most often described as ‘equine asthma’ or ‘heaves’, clinical signs vary from a mild cough at exercise, through to exercise intolerance, an obvious ‘wheeze’ and respiratory difficulty. In severe cases the expiratory phase (breathing out) will be split into two phases with an abdominal effort included. The abdominal muscles that assist breathing will become larger and form what is called a ‘heave line’ (see picture).

Most evidence suggests that the disease is due to the lungs’ hypersensitivity to inhaled allergens such as fungal spores, mould, dust and endotoxins. The most common form is seen when horses are stabled and fed hay, both of these practices resulting in increased exposure to potential allergens. However, we do see a ‘summer pasture associated’ type of disease as well.

Subsequent inflammation in the lungs causes changes to the lung lining and constriction of the airways. In severe and chronic (long term) cases this can also result in airway thickening and significant lung changes, all of which tend to further exacerbate the disease.

Diagnosis is often based on history, clinical signs and response to treatment. In small ponies and miniatures, radiology may be useful as a diagnostic aid and in others endoscopy (scoping) and lung function testing can be performed as well. The ideal method for diagnosis involves flushing fluid into the lungs and collecting it again in a process called ‘bronchoalveolar lavage’. Analysis of the cell types found in the fluid will give a diagnosis. Generally, infection is not present, however due to the lungs’ reduced ability to defend against pathogens, it is possible that some horses may develop a secondary pneumonia which can further complicate the disease.

Treatment of mild cases often respond well to management and dietary changes, including turn out, low dust bedding, change of hay or soaking before feeding. Pasture turn out is often crucial to management of these cases! In more severe cases, change of management should be combined with treatment with bronchodilators (to dilate airways) and steroids (to decrease inflammation). This can initially be in the form of oral treatments, but inhaler therapy is recommended long term. This provides targeted drug concentrations in the lungs with minimal side effects through the body. Putting your horse on an inhaler for its asthma sounds a bit weird, but with some investment in the correct equipment it is a simple, cheap and effective long-term treatment protocol!

Due to its allergic/hypersensitive cause, RAO is a lifelong disease and will require long term management and treatment. That being said, early identification of the issue and relevant risk factors make it very controllable, and most horses when managed correctly can live long wheeze-free lives!